I've been following the progress of elementary OS (yes, their brand is to use a lower case e) for some time, ever since Cassidy James Blaede crossed my Twitter feed.  elementary uses a different desktop environment to I'm used to (Gnome 3 was my previous) and I wanted to check it out.  In this post I'll cover my first impressions of the environment but I'll dive into more detail in future posts.

What is elementary OS?

elementary OS is Linux distribution based on Ubuntu's Long Term Support branch and brands itself as a "fast, open, and privacy-respecting replacement for Windows and macOS".  elementary offer the operating system on a pay what you want basis, which has attracted some criticism as it's not immediately clear you can specify $0.  They encourage payment because it helps developers of both the OS and their curated apps have the time to spend on development.  Initially I only wanted to test this Linux version so I think I paid a whole $10 for a perpetual licence [1].  Note though that payment is not mandatory, and the organisation does acknowledge that not everyone can afford to pay.

One of the most obvious differences with elementary OS is the desktop environment.  Whereas Gnome 3 is a staple of the Linux world, and seems to have overtaken KDE, elementary shuns the Gnome Desktop Manager and Gnome Desktop Environment in favour of their own: Pantheon. My main reason for wanting to try elementary was to try Pantheon, which is based on Gnome software libraries such as GTK.

Having tried elementary in a virtual machine I didn't feel I was getting the best experience of it, so decided to install the OS on my laptop.  I'd installed Ubuntu on the laptop previously when I moved away from NixOS and I wasn't worried about hardware compatibility because elementary is based on Ubuntu.  The most important thing for me was taking a list of my installed software (apt list --installed), and backing up /etc/fstab and /etc/crypttab so I could put everything back quickly.  My home area is on a separate encrypted disk so I wasn't concerned about data loss.

I burnt the elementary OS 5.1 "Hera" (based on Ubuntu 18.04 LTS) installation ISO to DVD and booted from it to run the installer.  This was a painless process and involved specifying my destination disk (The M.2 SATA drive in my laptop), a username plus a couple of options.  It then sat running in the background and all was well.  After booting the new environment for the first time I added my home drive to fstab and crypttab, rebooted and I was good to go.

Pictures are worth a thousand words, so I'll start with a screenshot of my Pantheon desktop:

Initially I had some problems with the icons due to using my home area from a previous desktop environment.  I've actually ported the same laptop home area around for years, so there's doubtless plenty of "fluff" in config files that I don't need.  You can see the broken icons in the screenshot below - a grey "photo" type icon or a missing app icon in the dock:

Fortunately someone else had encountered this before, and the problem was due to old configs in the home area (as I expected).  I solved the problem by using the Gnome Tweaks tool (install via sudo apt install gnome-tweaks) and setting my appearance options to the elementary OS defaults.

I'm getting used to the dock, which hides to give a full screen application all the available screen space.  A dock is a bit MacOS like in my view, but that's not a huge problem (it works) and really it's just a different style of the Gnome 3 side panel I was already used to.  The applications menu in the top left is also nicely functional and I prefer that it takes up less space than the Gnome 3 full screen equivalent.

"Hot corners" in the desktop allow you to specify what happens when the mouse touches the corner of a screen.  It's nice to see the inclusion of a custom command option there, although I can see that yielding unexpected results if you knock your mouse!

Annoyingly the close button for a window is on the left, which is taking some getting used to.  What's strange for me is that if I'm on Windows I close applications by double clicking in the top left anyway (a hangover from my time using Windows 3.1) but on Linux my brain just isn't wired to go to the left to close.  I'm sure I'll get used to it, although an option to switch it back would be nice.  Oh, there's no minimise button either which will take some adjustment.

In my previous environment, Gnome 3's multitasking view was set up to appear when pressing the Windows key.  Sadly that doesn't seem to be an option in elementary so I've configured top and bottom left hot corners to quickly show me all my open applications and allow me to switch to it.  Multitasking view also allows you to switch between workspaces, meaning you can organise different workloads on different virtual desktops.  By far I find this the quickest way to switch between applications (the same as I did in Gnome 3).

I don't know about you, but I can suffer notification fatigue.  Chats pinging away both audibly and visually popping up a distracting notification can cause me to get very frustrated and I have been known to close such applications when at work (not so easy for someone if they want to get hold of me!).  elementary addresses this with a do not disturb mode and I'm looking forward to using that in a bit more depth when I really need to focus on things.

Some of the elementary default apps tie in really nicely with the notification system too.  For example, I'd set some tasks running in a terminal and, frankly, forgotten about it.  elementary let me know the task was done with a clear but unobtrusive notification:

You can view notification history from the menu in the top right (in my screenshot it's a bell with a red dot on it) and the notifications are grouped by application.  Settings are available to toggle if the notification makes a noise (on by default) which is handy because although it's nice to be able to see what music track has just started to play, I don't want a popping sound interrupting the music:

As a result of being Ubuntu under the hood I was able to install other applications that I'm used to, regardless of there being elementary native counterparts.  For example, I needed Steam (just ask my daughter, I definitely need to be able to play Terraria!) and could install that via a standard apt install steam.  Similarly I was able to import Signal's desktop app via their instructions and could run the Jetbrains toolbox to access all my development environments.

A nice thing about the applications menu is that searching for an application that's not installed means the search results offered the ability to search the AppCenter (store) for it, as in this example for the Clementine music player:

So far I'm really liking my elementary OS experience.  The environment feels clean and unencumbered and there's clearly some joined up thinking going on in terms of user experience.  You can check out part two, where I talk about some of elementary's curated apps.

Banner image: the about screen of my elementary OS Hera installation.

[1] if I decide to use elementary OS continually I'll probably pay them some more.

Thanks to one of my readers for reaching out and pointing out I'd pasted the part two link at the top of this post lots of times!

A reflection on my household's energy usage. 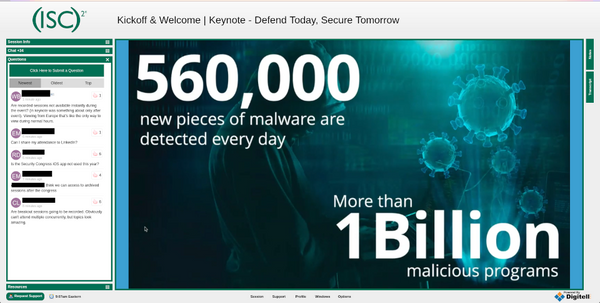 What was it like to actually attend a conference purely online?