Outside of laptops there are generally there are two types of keyboard - membrane and mechanical.  Membrane keyboards are your everyday £10 devices that you'd get for free when you buy a computer.  Mechanical keyboards are more expensive but give a better typing experience, theoretically.  In this post I'll discuss the research I conducted into mechanical boards before finally committing to purchase.

Right at the start, I'd like to give a shout out to a few companies that really helped on this journey by providing information.  Both companies responded to my questions and queries and didn't pressure me into purchasing any hardware from them.

The Keyboard Company, based in Stroud, England, stock all manner of keyboards from many vendors.

MechBoards, also based in England specialise in selling keyboard parts, kits and accessories.

How does it work?

In a membrane keyboard the keys press down on a flexible plastic / rubber sheet, which in turn completes an electrical circuit on the circuit board underneath.  When the circuit is completed the keyboard knows to send the relevant letter to the computer.

Mechanical keyboards have a physical switch underneath each key, which is what significantly adds to the cost.  In the early days of personal computers the keyboard would have been a mechanical one, often with a spring under the key cap to help bringing the key back up.  I saw lots of talk about the IBM model M keyboard of the 80s - 90s, although it's not actually a keyboard I like the look of so was in no rush to acquire one!

Different switches have different properties (sounds, actuation force) so I spent some time researching the switches and testing them.  A work colleague allowed me to use his "semi mechanical" (not sure what that means) keyboard which seemed to have green switches.  I'm not sure if they were actually Cherry MX green switches, but they certainly operated with quite an audible click like the Cherry ones do.  My hearing is very good (occupational health said so, despite cocktail party deafness) and the clicky nature just annoyed me, thus ruling out switches with audible clicks.

To help narrow down my choice further I purchased an Akwox switch tester with blue, brown, red and black switches.  Research showed a mix of opinions ranging from "it's worth getting a tester" to "four switches cannot possibly emulate a whole keyboard's worth of switches, so save your money".  For the sake of £8 it seemed a worthwhile investment, and I might use the switches in another project later down the line.

Cherry switches come in tactile and linear models.  Linear switches are smooth in operation, going straight down, while tactile units have a perceptible bump at the actuation point (when the key press is registered).  The tester allowed me to determine that I'd prefer the tactile Cherry MX brown, although it was a close run thing between that and the linear reds.  I also opted to have noise suppressing "O" rings fitted to my keyboard.

Some time ago I switched to use the UK Dvorak layout, rather than UK Qwerty.  This was partly a mental exercise, I wanted to know if I could actually do it, but also something I did because, in theory, Dvorak will be better for my hands long term.  Dvorak reduces stretching for keys by placing the most used letters together.  This means that my keyboard layout looks like this:

There aren't many keyboards that offer that layout on the key caps, and the two that I could find I didn't like the look of.

I still have a need to see Qwerty occasionally, for example when I'm interacting with a system that lacks the Dvorak layout.  Although I can touch type Qwerty and Dvorak it's still comforting to see letters, especially when there's no visual indicator of what I've typed.  To that end I need my keyboard to show both letters, preferably in different colours.  Sadly that means I either need a custom print or I have to put stickers on the keys again - I really didn't want to do that.

Next I looked for various reviews, both written and YouTube videos.  Ducky keyboards came highly recommended, and I know someone who's very happy with his Ducky board, but that still didn't solve my layout problem.  After a bit of digging I came to the conclusion the key (no pun intended) factors were build quality and, optionally, the software capabilities.  Given I use Linux most of the time software was of less interest to me as most applications were Windows only. Any changes I wanted to make to the keyboard's configuration really needed to be made on the board itself.

In the absence of a Dvorak printed layout I'd resigned myself to rearranging the key caps.  Fortunately I checked with Keyboard Company and found that keys have different profiles (heights) on the various keyboards I was looking at.  Not being able to rearrange keys, short of having a very unusable and undesirable typing experience, meant I'd have to put stickers on each key.  This was still not something I wanted to do to a pricey keyboard.

After much research I decided to bite the bullet and order a custom printed keyboard from WASD Keyboards.  This was the only way I could get the Dvorak and Qwerty layouts on the key caps, while also having the ability to change the colours of individual keys.  I spent quite some time playing with colour schemes before deciding on the final design.  The WASD is also programmable, without additional software.

In a future blog post, after I've used the keyboard for a bit, I'll provide a review.  Check back soon! 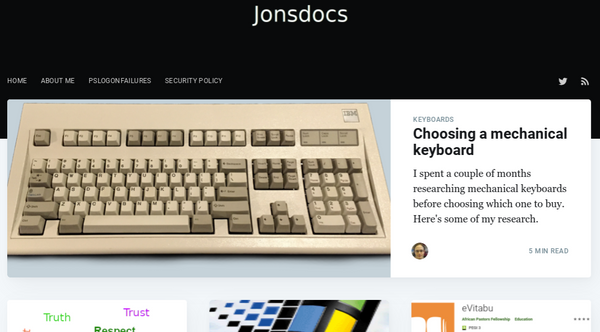 There's been a few podcasts / Tweets / comments that I've noticed recently where people have talked about why they write a blog.  This is why I blog (apparently it's a verb)

When you've found a vulnerability, bug or data leak how do you report it? This post looks at the considerations for disclosure.